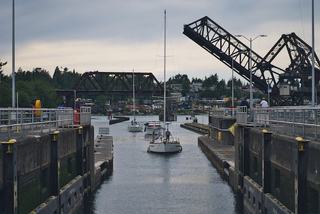 Ballard Yards apartments are near Ballard Locks—just an 8-minute walk puts you at the entrance on our side of the canal. We named ourselves Ballard Yards because we are practically in the front yard of one of Ballard’s main attractions.

Ballard Locks is so much more than a traveling route for boats (and salmon!). This spot is a community park, a dog-walking spot, an easy canal cross-over for pedestrians and cyclists, and even more. While it’s a popular tourist destination, it also plays an important role in the everyday lives of Ballard residents. Here’s what to expect when you’re visiting Ballard Locks, and how Ballard Locks may be a part of your everyday life here.

Who is Hiram M. Chittenden?

Widely known as the Ballard Locks, officially they are named the Hiram M. Chittenden locks. They are named after an influential army corps engineer who headed up the project when they were originally designed and built in the early 1900s.

Ballard Locks is free to visit! This reflects its status as an ordinary route for everyday Seattle citizens. Our residents, even if they aren’t crossing the canal, like to visit for a nice dog walk or picnic.

You pass this little building on the way to the locks, and it’s worth stopping in at least once. With an exhibit featuring historical photographs and stories about the creation of this fascinating engineering feat, you can learn more about how the locks came to be. It’s also a great gift shop—consider picking up a postcard to send to your out-of-state loved ones.

The locks were built with the salmon in mind. So that their migration wouldn’t be interrupted, and the fish could swim upstream to spawn every year, the locks were built with “fish ladders”, which create “steps” in the structure of the locks that allow salmon to swim up it and over to the other side. Sockeye salmon, chinook, and coho salmon all travel through Ballard Locks. There are underground viewing areas that visitors can enter with large windows to try and catch a glimpse of the fish. The fish tend to migrate during the summer. Different species have different peak viewing times, but you’ll most likely catch a glimpse of the fish starting in mid-June and ending by the end of September.

This botanical garden is open to locks visitors. On the Ballard side of the locks, the garden runs along the canal. Seven acres of trees and plants with paved paths are an oasis of greenery in Northwest Seattle. This English-style garden is federally owned and run by Army gardeners, and often acts as a wedding venue due to its beauty. The garden is a great spot to pass through before crossing the canal, or a great place to walk your dog.

A series of walkways connect over the water of the canal at Salmon Bay. This is the route that pedestrians can take to get from the botanical garden to Commodore Park. They open and close to let through boats who are crossing the locks.

A great spot to see the Ballard skyline from the other side of the canal, this grassy, hilly park has scenic views. Perfect for a picnic lunch and watching the boats go by. Arriving at this little oasis means you’ve left the Ballard neighborhood and entered the Magnolia neighborhood of Seattle. It’s also a great location to see local wildlife—both of the sea and of the air.

Nearby, catch a glimpse of the beautiful and historic Salmon Bay bridge. A railroad drawbridge, and the final pass-through before boats reach Puget Sound, this is worth a glimpse. Best viewed from Commodore Park. Preservationists have fought hard to keep the bridge from being replaced by a more modern solution, so it still requires a human drawbridge operator. The locals know that it breaks down often, and when it’s broken, underneath the bridge is the best picnicking spot. It can be a bit noisy when it’s running and the subway lines are passing over it.

If you hit all the spots mentioned in this article and have a picnic in one of the parks, a visit to Ballard Locks (or Hiram M Chittenden Locks) can take up most of a lovely day. You can also pass through on a much shorter visit, depending on what you’re looking for. If you are simply using the locks to cross, then you can quickly just pass through. 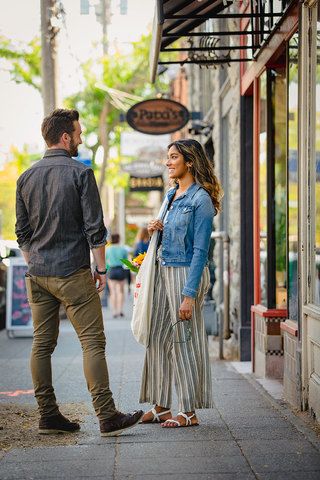 With a nod to tradition, and feet firmly pointed toward the future, Ballard is a place that bridges and connects.